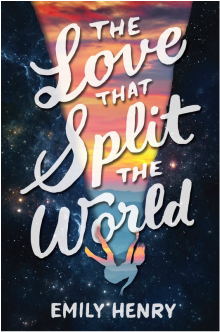 ​The Love that Split the World
By: April Henry

Natalie Cleary must risk her future and leap blindly into a vast unknown for the chance to build a new world with the boy she loves.   Natalie’s last summer in her small Kentucky hometown is off to a magical start... until she starts seeing the “wrong things.” They’re just momentary glimpses at first—her front door is red instead of its usual green, there’s a pre-school where the garden store should be. But then her whole town disappears for hours, fading away into rolling hills and grazing buffalo, and Nat knows something isn’t right.  That’s when she gets a visit from the kind but mysterious apparition she calls “Grandmother,” who tells her: “You have three months to save him.” The next night, under the stadium lights of the high school football field, she meets a beautiful boy named Beau, and it’s as if time just stops and nothing exists. Nothing, except Natalie and Beau.

In addition to an extraordinary love story, this book also includes a number of Native American stories that add an extra “oomph” to already well conceived story.  With books that share so many striking similarities it’s wonderful to see one that is utterly unique. 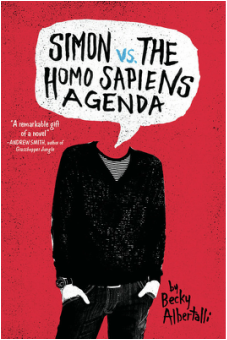 Simon vs. the Homo Sapiens Agenda
By: Becky Albertalli

Sixteen-year-old and not-so-openly gay Simon Spier prefers to save his drama for the school musical. But when an email falls into the wrong hands, his secret is at risk of being thrust into the spotlight. Now Simon is actually being blackmailed: if he doesn’t play wingman for class clown Martin, his sexual identity will become everyone’s business. Worse, the privacy of Blue, the pen name of the boy he’s been emailing, will be compromised.  With some messy dynamics emerging in his once tight-knit group of friends, and his email correspondence with Blue growing more flirtatious every day, Simon’s junior year has suddenly gotten all kinds of complicated. Now, change-averse Simon has to find a way to step out of his comfort zone before he’s pushed out—without alienating his friends, compromising himself, or fumbling a shot at happiness with the most confusing, adorable guy he’s never met.

Does this deal with some hard hitting issues?  Sure, but for the most part this book just puts you in a warm bubble of happy where you get to eat Oreos all day and do Facebook Scavenger Hunts with your family.  Most definitely one of the sweetest romances ever written and one of the best examples of all types of love – romantic, friendship, and family. 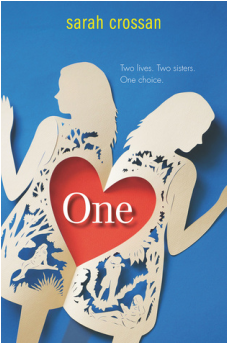 ​One
By: Sarah Crossan

Grace and Tippi are conjoined twins, joined at the waist, defying the odds of survival for sixteen years. They share everything, and they are everything to each other. They would never imagine being apart. For them, that would be the real tragedy.  But something is happening to them. Something they hoped would never happen. And Grace doesn’t want to admit it. Not even to Tippi.  How long can they hide from the truth—how long before they must face the most impossible choice of their lives?

While typically not a fan of novels in verse, it feels as though this is the best way to tell this story.  With such sparse prose, Crossan still packs a powerful punch as readers experience the bond of sisters and the fact that sometimes there are no good choices.  A truly lovely story that will not only have you grabbing the tissue box but also holding on to your own sister extra tightly. 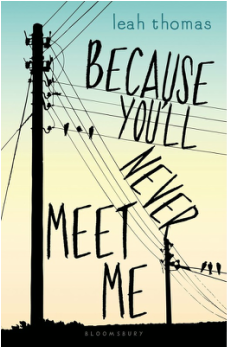 Because You’ll Never Meet Me
By: Leah Thomas

Ollie and Moritz are best friends, but they can never meet. Ollie is allergic to electricity. Contact with it causes debilitating seizures. Moritz’s weak heart is kept pumping by an electronic pacemaker. If they ever did meet, Ollie would seize. But Moritz would die without his pacemaker. Both hermits from society, the boys develop a fierce bond through letters that become a lifeline during dark times—as Ollie loses his only friend, Liz, to the normalcy of high school and Moritz deals with a bully set on destroying him.

A story of impossible friendship and hope under strange circumstances, this debut is powerful, dark and humorous in equal measure. These extraordinary voices bring readers into the hearts and minds of two special boys who, like many teens, are just waiting for their moment to shine. 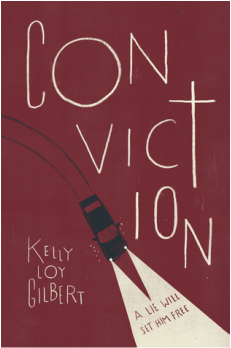 Ten years ago, God gave Braden a sign, a promise that his family wouldn’t fall apart the way he feared.  But Braden got it wrong: his older brother, Trey, has been estranged from the family for almost as long, and his father, the only parent Braden has ever known, has been accused of murder. The arrest of Braden’s father, a well-known Christian radio host, has sparked national media attention. His fate lies in his son’s hands; Braden is the key witness in the upcoming trial.  Braden has always measured himself through baseball. He is the star pitcher in his small town of Ornette, and his ninety-four-mile-per-hour pitch al- ready has minor league scouts buzzing in his junior year. Now the rules of the sport that has always been Braden’s saving grace are blurred in ways he never realized, and the prospect of playing against Alex Reyes, the nephew of the police officer his father is accused of killing, is haunting his every pitch.

Braden faces an impossible choice, one that will define him for the rest of his life, in this brutally honest debut novel about love, family, faith, and the ultimate test of conviction. 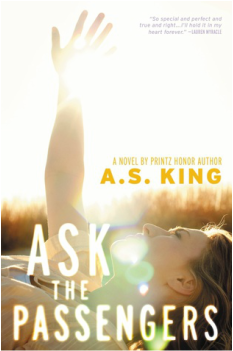 ​ Ask the Passengers
By: A.S. King

Astrid Jones desperately wants to confide in someone, but her mother's pushiness and her father's lack of interest tell her they're the last people she can trust. Instead, Astrid spends hours lying on the backyard picnic table watching airplanes fly overhead. She doesn't know the passengers inside, but they're the only people who won't judge her when she asks them her most personal questions--like what it means that she's falling in love with a girl.  As her secret relationship becomes more intense and her friends demand answers, Astrid has nowhere left to turn. She can't share the truth with anyone except the people at thirty thousand feet, and they don't even know she's there. But little does Astrid know just how much even the tiniest connection will affect these strangers' lives--and her own--for the better.

In this truly original portrayal of a girl struggling to break free of society's definitions, Printz Honor author A.S. King asks readers to question everything--and offers hope to those who will never stop seeking real love. 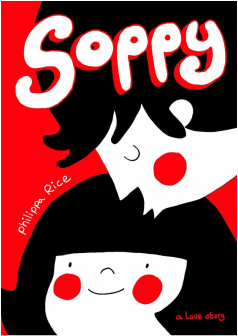 True love isn’t always about the big romantic gestures.
Sometimes it’s about sympathizing with someone whose tea has gone cold or reading together and sharing a quilt. When two people move in together, it soon becomes apparent that the little things mean an awful lot. The throwaway moments in life become meaningful when you spend them in the company of someone you love.

SOPPY is Philippa Rice’s collection of comics and illustrations based on real-life moments with her boyfriend. From grocery shopping to silly arguments and snuggling in front of the television, SOPPY captures the universal experience of sharing a life together, and celebrates the beauty of finding romance all around us. 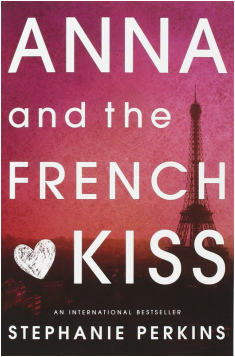 ​Anna and the French Kiss
By: Stephanie Perkins

Anna is looking forward to her senior year in Atlanta, where she has a great job, a loyal best friend, and a crush on the verge of becoming more. Which is why she is less than thrilled about being shipped off to boarding school in Paris--until she meets Étienne St. Clair. Smart, charming, beautiful, Étienne has it all...including a serious girlfriend.   But in the City of Light, wishes have a way of coming true. Will a year of romantic near-misses end with their long-awaited French kiss?

The epitome of the adorable love story, Perkins does an excellent job of creating characters and moments that are memorable but never cheesy.  You can’t help but root for Anna as she navigates not just her new home in Paris but also the heart of swoony Étienne St. Clair.  Fans of classic romance novels will love this one and will certainly appreciate that despite having the romance label it’s a solid story and while it is certainly sweet and dreamy, the characters and the emotion also feel quite real.
Don't forget to check out the two companion novels in Stephanie Perkins adorable trilogy!
Continue to share the love with these booklists!
Powered by