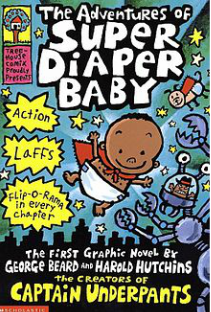 The Adventures of Super Diaper Baby
By: Dav Pilkey

Oh, no! It looks like George and Harold are in trouble again. . . . As punishment, the boys have to write a 100-page report on "good citizenship," and they have been specifically ordered NOT to make another comic about Captain Underpants. So what do they do? They create an all-new superhero . . . Super Diaper Baby! Super Diaper Baby's archenemy, Deputy Dangerous, wants to steal his powers and take over the planet. Will the diaper-wearing dynamo defeat the deputy, or is the entire Earth doomed? [from Amazon] 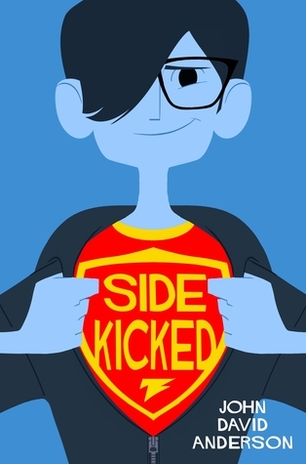 Andrew Bean might be a part of H.E.R.O., a secret organization for the training of superhero sidekicks, but that doesn't mean that life is all leaping tall buildings in single bounds. First, there's Drew's power: Possessed of super senses—his hearing, sight, taste, touch, and smell are the most powerful on the planet—he's literally the most sensitive kid in school. Then there's his superhero mentor, a former legend who now spends more time straddling barstools than fighting crime. Add in trying to keep his sidekick life a secret from everyone, including his parents, and the truth is clear: Middle school is a drag even with superpowers.

But this is all before a supervillain long thought dead returns to the city of Justicia, superheroes begin disappearing at an alarming rate, and Drew's two identities threaten to crash head-on into each other. Drew has always found it pretty easy to separate right from wrong, good from evil. It's what a superhero does. But what happens when that line starts to disappear? [from Barnes and Noble] 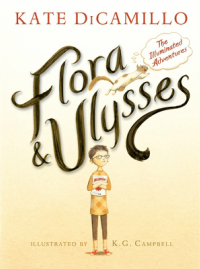 Flora and Ulysses: The Illuminated Adventures
By Kate Dicamillo

It begins, as the best superhero stories do, with a tragic accident that has unexpected consequences. The squirrel never saw the vacuum cleaner coming, but self-described cynic Flora Belle Buckman, who has read every issue of the comic book Terrible Things Can Happen to You!, is just the right person to step in and save him. What neither can predict is that Ulysses (the squirrel) has been born anew, with powers of strength, flight, and misspelled poetry — and that Flora will be changed too, as she discovers the possibility of hope and the promise of a capacious heart.  [from Barnes and Noble]