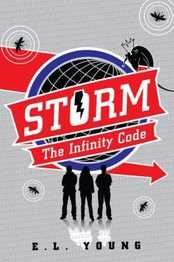 The leader of STORM, Science and Technology to Overrule Misery, has picked out Will Knight as someone he would like to have on his team. Will, a 14 year old boy, is an inventor who attends a gifted school in London. The leader of Storm, Andrew, is also 14 year and a multi-millionaire genius. His grandiose ideas include finding a cure of AIDS, stopping natural disasters, and solve the problems of the world. Will, who is facing his own personal struggle, does not see how a group of 14 year olds can help save the world when adults try and fail constantly. Will does not want any part in Storm until it is discovered that there is a sinister plot to create a deadly weapon. With Will on board the members of STORM are in a race to dismantle the weapon and figure out who has created the weapon.

Storm: The Infinity Code is the first book of the Storm series. Follow Andrew, Will, and Gaia as they solve the world’s problems with their genius minds, creative inventions, and their youthful optimism.
Click any of the books below to find out more about the series and discover
other books written by E.L. Young! 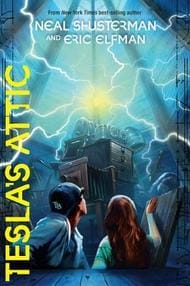 Fourteen year old Nick has just moved to Colorado Springs from Tampa with his father and brother after their house burns down. His father had inherited an old victorian house from his Aunt Greta. Upon entering the attic Nick is hit with a toaster and received four stitches. The attic is full of old odds and ends that Nick and his family do not need to they sell the items in a garage sale.

It seems to Nick that attic has extraordinary powers, it’s as if it has a purpose. Nick discovers that old odds and ends he found in the attic were the last inventions of the genius Nikola Tesla. Nick must race to gather up the items and return them to the attic for safe keeping against the Accelerati, a secret society of physicists.
Make sure to look for books 2 & 3 in the Accelerati ​Trilogy!
Blast Off with Out of this World Books from these Reading Lists!
Powered by