So many amazing Fall YA titles to look forward to!
​Make sure to check out just a few of them below!

Long before she was the terror of Wonderland, she was just a girl who wanted to fall in love. Catherine may be one of the most desired girls in Wonderland, and a favorite of the unmarried King of Hearts, but her interests lie elsewhere. A talented baker, all she wants is to open a shop with her best friend. But according to her mother, such a goal is unthinkable for the young woman who could be the next queen.  Then Cath meets Jest, the handsome and mysterious court joker. For the first time, she feels the pull of true attraction. At the risk of offending the king and infuriating her parents, she and Jest enter into an intense, secret courtship. Cath is determined to define her own destiny and fall in love on her terms. But in a land thriving with magic, madness, and monsters, fate has other plans.  In her first stand-alone teen novel, the New York Times-bestselling author dazzles us with a prequel to Alice's Adventures in Wonderland.[From Amazon.com]

If there’s anyone who knows how to do a fairy tale re-telling it’s Marissa Meyer!  Meyer’s Lunar Chronicles series was fantastic, so it’s even more exciting to see what she’ll come up with next in this brand new, standalone title. 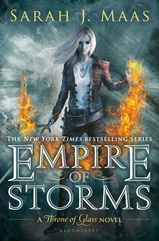 I’m not even going to write a synopsis because, SPOILERS!  Instead, you should get started right away reading the first book in the series, Throne of Glass, in order to prepare for the epic awesomeness of this fifth installment.  Here’s the synopsis for the first book:

After serving out a year of hard labor in the salt mines of Endovier for her crimes, 18-year-old assassin Celaena Sardothien is dragged before the Crown Prince. Prince Dorian offers her her freedom on one condition: she must act as his champion in a competition to find a new royal assassin.  Her opponents are men-thieves and assassins and warriors from across the empire, each sponsored by a member of the king's council. If she beats her opponents in a series of eliminations, she'll serve the kingdom for three years and then be granted her freedom.  Then one of the other contestants turns up dead... quickly followed by another. Can Celaena figure out who the killer is before she becomes a victim? As the young assassin investigates, her search leads her to discover a greater destiny than she could possibly have imagined [From Amazon.com​]
​Are you hooked yet?
In addition to Throne of Glass, make sure to check out the rest of the books in the series! 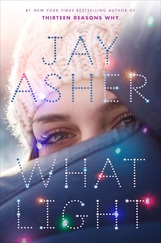 Sierra's family runs a Christmas tree farm in Oregon—it's a bucolic setting for a girl to grow up in, except that every year, they pack up and move to California to set up their Christmas tree lot for the season. So Sierra lives two lives: her life in Oregon and her life at Christmas. And leaving one always means missing the other.

Until this particular Christmas, when Sierra meets Caleb, and one life eclipses the other.

By reputation, Caleb is not your perfect guy: years ago, he made an enormous mistake and has been paying for it ever since. But Sierra sees beyond Caleb's past and becomes determined to help him find forgiveness and, maybe, redemption. As disapproval, misconceptions, and suspicions swirl around them, Caleb and Sierra discover the one thing that transcends all else: true love [From Amazon.com]

I don’t know if you remember a little book called Thirteen Reasons Why, a book that was not only wildly popular, but utterly heartbreaking too.  It also feels like it’s been eleventy billion years since it came out [almost 10 years if you’re looking for numbers] and this is the first solo book that Asher has released since then making it one fans of his first book will surely be excited to get their hands on! 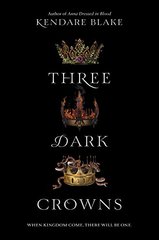 In every generation on the island of Fennbirn, a set of triplets is born: three queens, all equal heirs to the crown and each possessor of a coveted magic. Mirabella is a fierce elemental, able to spark hungry flames or vicious storms at the snap of her fingers. Katharine is a poisoner, one who can ingest the deadliest poisons without so much as a stomachache. Arsinoe, a naturalist, is said to have the ability to bloom the reddest rose and control the fiercest of lions.  But becoming the Queen Crowned isn’t solely a matter of royal birth. Each sister has to fight for it. And it’s not just a game of win or lose...it’s life or death. The night the sisters turn sixteen, the battle begins.
The last queen standing gets the crown [From Amazon.com]

Kendare Blake is fantastic at creating atmosphere, she did so in her amazing Anna Dressed in Blood duology and I’m guessing from all the buzz she’s done it again in her latest, Three Dark Crowns.  For this librarian September 20th can’t come fast enough!
Get even more excited with this Three Dark Crowns book trailer from Epic Reads! 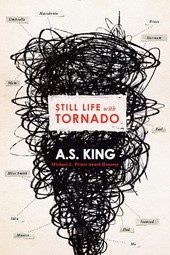 Sixteen-year-old Sarah can't draw. This is a problem, because as long as she can remember, she has "done the art." She thinks she's having an existential crisis. And she might be right; she does keep running into past and future versions of herself as she wanders the urban ruins of Philadelphia. Or maybe she's finally waking up to the tornado that is her family, the tornado that six years ago sent her once-beloved older brother flying across the country for a reason she can't quite recall. After decades of staying together "for the kids" and building a family on a foundation of lies and domestic violence, Sarah's parents have reached the end. Now Sarah must come to grips with years spent sleepwalking in the ruins of their toxic marriage. As Sarah herself often observes, nothing about her pain is remotely original—and yet it still hurts [From Amazon.com]

If you’ve never heard of A.S. King, now’s the time to do so!  Some of her other books have been featured on the blog here and being someone who will read everything and anything that she writes, I’m beyond excited for latest novel.
​Can’t wait for October 11th?  Make sure to check out her other books while you wait! 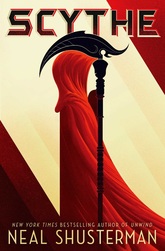 In a world where disease has been eliminated, the only way to die is to be randomly killed (“gleaned”) by professional reapers (“scythes”). Citra and Rowan are teenagers who have been selected to be scythe’s apprentices, and—despite wanting nothing to do with the vocation—they must learn the art of killing and come to understand the necessity of what they do.

Only one of them will be chosen as a scythe’s apprentice. And when it becomes clear that the winning apprentice’s first task will be to glean the loser, Citra and Rowan are pitted against one another in a fight for their lives [From Amazon.com]

Much like A.S. King, I will, literally, read anything and everything written by Neal Shusterman.  So when an exciting new book comes out featuring teen grim reapers pitted against each other in a world without disease, you bet I’ll be super excited about it! 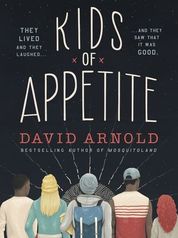 Victor Benucci and Madeline Falco have a story to tell.
It begins with the death of Vic’s father.
It ends with the murder of Mad’s uncle.
The Hackensack Police Department would very much like to hear it.
But in order to tell their story, Vic and Mad must focus on all the chapters in between.

This is a story about:

1. A coded mission to scatter ashes across New Jersey.
2. The momentous nature of the Palisades in winter.
3. One dormant submarine.
4. Two songs about flowers.
5. Being cool in the traditional sense.
6. Sunsets & ice cream & orchards & graveyards.
7. Simultaneous extreme opposites.
8. A narrow escape from a war-torn country.
9. A story collector.
10. How to listen to someone who does not talk.
11. Falling in love with a painting.
12. Falling in love with a song.
13. Falling in love.
[From Amazon.com]

It’s always fun to see what debut authors come up with the second time around.  After the well-deserved success of Arnold’s debut, Mosquitoland, which came out last year, it will be interesting to see if his sophomore attempt has the same fantastic balance of heart, humor, and quirkiness that made his debut such a hit.
Get to know author, David Arnold, with this awesome interview from the 2016 BookCon!
Keep "falling" for new books with these booklists!
Powered by