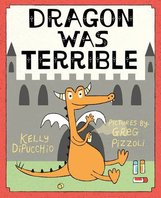 Dragon was terrible.  Of course, most dragons are a little terrible, but this Dragon, well, he was really terrible.  Like flower stomping, book scribbling, candy stealing terrible.  The King, the Knights and even the ordinary villagers all tried to tame the dragon, (in hopes that he would stop being such a jerk!) but no one could do it!  Just when they thought there was no hope something extraordinary (involving a good story!) happens.  Check out this clever new take on a fairy tale and enjoy illustrator Greg Pizzoli’s charming drawings along with a cute story from author Kelly DiPucchio. 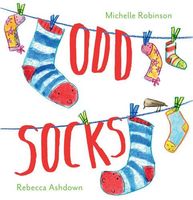 Suki and Sosh are quite a lovely pair, of socks that is!  White and blue stripes, red toes, they fit together perfectly and are so in love.  Until one day, Suki gets a hole!  The other socks warn them that Suki isn’t long for the sock drawer, and Sosh should prepare himself for losing her.  Sosh says no way!  How could they get rid of Suki, they belong together?!?  But the hole gets bigger, and one night Suki disappears.  So begins Sosh’s long quest to find his beloved.  Full of hope and mystery, this story is sure to pull you in.
​
Will Sosh find Suki?  Will they make it back to the sock drawer?  You simply must read and find out Suki and Sosh’s destiny and learn about the secret world of foot wear!
Click on one of the books below to take you to Michelle’s blog for some fun coloring and activities related to Odd Socks and some of her other books! 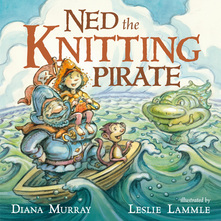 Ned the Knitting Pirate
By: Diana Murray
​Illustrated By: Leslie Lammle
Released: August 23, 2016
​
As a knitting librarian this one called to me!  Ned knits.  Now, you may have guessed that if you are a pirate, knitting isn’t cool.  You need to be doing things like swabbing the decks, collecting booties, and sailing the seas!  According to Ned’s captain (and pirate society) pirates don’t knit.  Faced with walking the plank, Ned sadly puts his knitting away.  But when an angry sea monster tries to sink the ship, the pirates may find that Ned’s knitting may come in handy, in a very unconventional way!  Charming illustrations, rhyming verse and pirate song add much to this pirate tale! 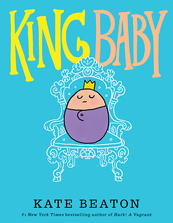 “All hail King Baby! He greets his adoring public with giggles and wiggles and coos, posing for photos and allowing hugs and kisses. But this royal ruler also has many demands, and when his subjects can't quite keep up, King Baby takes matters into his own tiny hands.”

This one is perfect if you toddler is expecting a little brother or sister soon!  It should join the ranks of classics such as Julius, the Baby of the World by Kevin Henkes and smart, newer titles about siblings, like Maple and Willow Together by Lori Nichols.  With Beaton’s simple, funny drawings and witty writing, this is sure to be a hit! 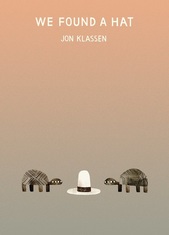 ​Did you love I Want My Hat Back and This is Not My Hat by Jon Klassen?  Then you will be thrilled with the final book in this quirky trilogy, We Found a Hat!  This is the story of two turtles who happen upon one very fetching hat.  They both look good in it.  They both want it.  Hmm.  Given the tone of the two previous books, I predict some shenanigans may occur!  I can’t wait to read this one!  Look for it mid-October on our shelves!  And possibly in storytime!
Keep "falling" for new books with these booklists!
Powered by