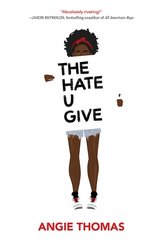 The Hate U Give
By: Angie Thomas

Sixteen-year-old Starr Carter moves between two worlds: the poor neighborhood where she lives and the fancy suburban prep school she attends. The uneasy balance between these worlds is shattered when Starr witnesses the fatal shooting of her childhood best friend Khalil at the hands of a police officer. Khalil was unarmed.

Soon afterward, his death is a national headline. Some are calling him a thug, maybe even a drug dealer and a gangbanger. Protesters are taking to the streets in Khalil’s name. Some cops and the local drug lord try to intimidate Starr and her family. What everyone wants to know is: what really went down that night? And the only person alive who can answer that is Starr.

But what Starr does—or does not—say could upend her community. It could also endanger her life (from amazon.com)

Okay – technically this book doesn’t come out until the end of the month, but I had to include it on this month’s list.  Not only do readers have an exciting release to look forward to but this book is just that good.  Much like All American Boys (also on this list), this book does an exceptional job of opening up a conversation with teens about racism, police brutality, and the Black Lives Matter movement.  Additionally, Angie Thomas is able to accomplish this in a manner that is not only sensitive but accessible to teen readers.  Definitely a new book worth checking out, one that is timely, relevant, and completely necessary. 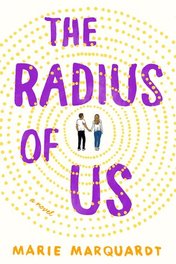 The Radius of Us
By: Marie Marquardt

Ninety seconds can change a life ― not just daily routine, but who you are as a person. Gretchen Asher knows this, because that’s how long a stranger held her body to the ground. When a car sped toward them and Gretchen’s attacker told her to run, she recognized a surprising terror in his eyes. And now she doesn’t even recognize herself.

Ninety seconds can change a life ― not just the place you live, but the person others think you are. Phoenix Flores Flores knows this, because months after setting off toward the U.S. / Mexico border in search of safety for his brother, he finally walked out of detention. But Phoenix didn’t just trade a perilous barrio in El Salvador for a leafy suburb in Atlanta. He became that person ― the one his new neighbors crossed the street to avoid.

Ninety seconds can change a life ― so how will the ninety seconds of Gretchen and Phoenix’s first encounter change theirs?

Told in alternating first person points of view, The Radius of Us is a story of love, sacrifice, and the journey from victim to survivor. It offers an intimate glimpse into the causes and devastating impact of Latino gang violence, both in the U.S. and in Central America, and explores the risks that victims take when they try to start over. Most importantly, Marie Marquardt's The Radius of Us shows how people struggling to overcome trauma can find healing in love.  Both timely and relevant, this is a must read for EVERYONE. (from amazon.com) 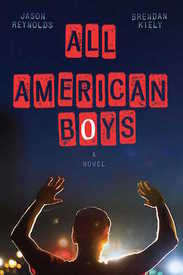 This winner of the Coretta Scott King Award and Walter Dean Myers Award for Outstanding Children’s Literature, tells the story of two teens—one black, one white—who grapple with the repercussions of a single violent act that leaves their school, their community, and, ultimately, the country bitterly divided by racial tension.

A bag of chips. That’s all sixteen-year-old Rashad is looking for at the corner bodega. What he finds instead is a fist-happy cop, Paul Galluzzo, who mistakes Rashad for a shoplifter, mistakes Rashad’s pleadings that he’s stolen nothing for belligerence, mistakes Rashad’s resistance to leave the bodega as resisting arrest, mistakes Rashad’s every flinch at every punch the cop throws as further resistance and refusal to STAY STILL as ordered. But how can you stay still when someone is pounding your face into the concrete pavement?

There were witnesses: Quinn Collins—a varsity basketball player and Rashad’s classmate who has been raised by Paul since his own father died in Afghanistan—and a video camera. Soon the beating is all over the news and Paul is getting threatened with accusations of prejudice and racial brutality. Quinn refuses to believe that the man who has basically been his savior could possibly be guilty. But then Rashad is absent. And absent again. And again. And the basketball team—half of whom are Rashad’s best friends—start to take sides. As does the school. And the town. Simmering tensions threaten to explode as Rashad and Quinn are forced to face decisions and consequences they had never considered before.

Written in tandem by two award-winning authors, this tour de force shares the alternating perspectives of Rashad and Quinn as the complications from that single violent moment, the type taken from the headlines, unfold and reverberate to highlight an unwelcome truth.  Written with honesty and sensitivity, this novel opens the door for a discussion that is not only interesting but completely necessary (from amazon.com). 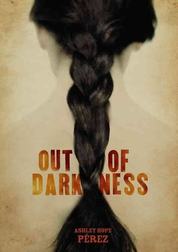 Out of Darkness
By: Ashley Hope Perez

"This is East Texas, and there's lines. Lines you cross, lines you don't cross. That clear?"

New London, Texas. 1937. Naomi Vargas and Wash Fuller know about the lines in East Texas as well as anyone. They know the signs that mark them. They know the people who enforce them. But sometimes the attraction between two people is so powerful it breaks through even the most entrenched color lines. And the consequences can be explosive.

Ashley Hope Pérez takes the facts of the 1937 New London school explosion the worst school disaster in American history as a backdrop for a riveting novel about segregation, love, family, and the forces that destroy people (from amazon.com)

A 2015 Michael L. Printz Honor book, this beautifully written novel brings to life a facet of history few know about and its ability to examine human nature, from kindness and love to acts of racial and sexual violence, will easily resonate with readers.  The inclusion of an awesome Author’s note as well as black and white photographs add a necessary depth to not only punctuate the disaster itself but also the tensions leading up to it. 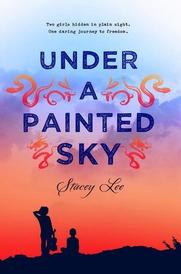 Under a Painted Sky
By: Stacey Lee

All Samantha wanted was to move back to New York and pursue her music, which was difficult enough being a Chinese girl in Missouri, 1849. Then her fate takes a turn for the worse after a tragic accident leaves her with nothing and she breaks the law in self-defense. With help from Annamae, a runaway slave she met at the scene of her crime, the two flee town for the unknown frontier.  But life on the Oregon Trail is unsafe for two girls. Disguised as Sammy and Andy, two boys heading for the California gold rush, each search for a link to their past and struggle to avoid any unwanted attention. Until they merge paths with a band of cowboys turned allies, and Samantha can’t stop herself from falling for one. But the law is closing in on them and new setbacks come each day, and the girls will quickly learn there are not many places one can hide on the open trail (from amazon.com)

The Oregon Trail like you’ve never seen it before, through the eyes of two smart, resourceful, and brave Chinese American and African American girls.  In addition to this riveting perspective, the novel itself is filled with high drama, tension, romance, and bits of humor that are sure to keep every type of reader turning those pages. 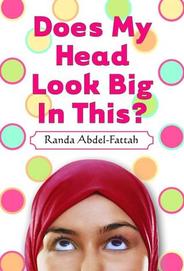 Does My Head Look Big in This?
By: Randa Abdel-Fattah

When sixteen-year-old Amal decides to wear the hijab full-time, her entire world changes, all because of a piece of cloth...

Sixteen-year-old Amal makes the decision to start wearing the hijab full- time and everyone has a reaction. Her parents, her teachers, her friends, people on the street. But she stands by her decision to embrace her faith and all that it is, even if it does make her a little different from everyone else.

Can she handle the taunts of "towel head," the prejudice of her classmates, and still attract the cutest boy in school? Brilliantly funny and poignant, Randa Abdel-Fattah's debut novel will strike a chord in all teenage readers, no matter what their beliefs (from goodreads.com)

While the tone is light-hearted, the subject matter is one that is important, relevant and utterly necessary during these turbulent times.  Like all of us, Amal isn’t perfect making her a relatable MC with a truly fantastic voice, one that readers will want to listen to making this an absolute must read.  It's also a book that has the potential to help make us kinder, compassionate, and more understanding human beings. 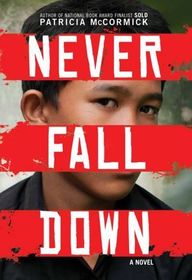 ​Never Fall Down
By: Patricia McCormick

This National Book Award nominee from two-time finalist Patricia McCormick is the unforgettable story of Arn Chorn-Pond, who defied the odds to survive the Cambodian genocide of 1975-1979 and the labor camps of the Khmer Rouge.

Based on the true story of Cambodian advocate Arn Chorn-Pond, and authentically told from his point of view as a young boy, this is an achingly raw and powerful historical novel about a child of war who becomes a man of peace. It includes an author's note and acknowledgments from Arn Chorn-Pond himself.

When soldiers arrive in his hometown, Arn is just a normal little boy. But after the soldiers march the entire population into the countryside, his life is changed forever.  Arn is separated from his family and assigned to a labor camp: working in the rice paddies under a blazing sun, he sees the other children dying before his eyes. One day, the soldiers ask if any of the kids can play an instrument. Arn's never played a note in his life, but he volunteers.

This decision will save his life, but it will pull him into the very center of what we know today as the Killing Fields. And just as the country is about to be liberated, Arn is handed a gun and forced to become a soldier (from amazon.com)
​March (Books 1, 2, & 3)
By: John Lewis & Andrew Aydin
Art By: Nate Powell
YA GRAPHIC NOVEL
Congressman John Lewis (GA-5) is an American icon, one of the key figures of the civil rights movement. His commitment to justice and nonviolence has taken him from an Alabama sharecropper's farm to the halls of Congress, from a segregated schoolroom to the 1963 March on Washington, and from receiving beatings from state troopers to receiving the Medal of Freedom from the first African-American president.

March is a vivid first-hand account of John Lewis' lifelong struggle for civil and human rights, meditating in the modern age on the distance traveled since the days of Jim Crow and segregation. Rooted in Lewis' personal story, it also reflects on the highs and lows of the broader civil rights movement (from amazon.com)

Each book in the trilogy spans a different period in Lewis’s life and the civil rights movement.  With compelling storytelling and jaw dropping illustrations, this graphic history is an important addition to every bookshelf, one that will encourage discussion and have readers of all ages grabbing again and again.

If that doesn’t convince you check out all the awards it’s won!