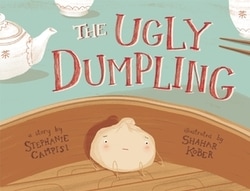 The Ugly Dumpling
By: Stephanie Campisi
​Illustrated By: Shahar Kober

This is a cute story about fitting in, with the gross addition (little people always love the gross stuff right?) of a cockroach.  So the ugly dumpling feels like he just doesn’t fit in.  Even though none of the dumplings are particularly attractive, he just really doesn’t look like the rest of them at all!  One day, a  cockroach comes and spirits him up to the top of the restaurant so he can see all the beautiful Chinese food, and how it is all different but still scrumptious!  Little does the ugly dumpling know that a big surprise is waiting for him in the restaurant below!  A surprise that might make him feel a little more welcome.
We all know the Ugly Duckling is perhaps the first tale of acceptance we share with our little people and Ms. Campisi was inspired by this tale.
Click the dumplings for a little background information from author Stephanie Campisi’s website!

What was the inspiration for the The Ugly Dumpling?
My stories almost invariably start with just a title,
in this case one I scribbled down and stuck to my desk so it couldn’t escape.

The book is definitely a hat-tip to the Hans Christian Andersen fairy tale, although I might have taken just a few liberties in its telling (I suspect a cockroach would have fared less well had it befriended a duckling).

The setting came about mostly because a steamed bun seemed like the natural "swan" equivalent of a dumpling - and The Ugly Pierogi or The Ugly Gnocchi didn’t quite have the same ring.  Also, now I can claim steamed buns as a tax expense”

Take a look at the FAQ’s that follow this on the above link to hear more about
Stephanie Campisi’s message of diversity in this book. 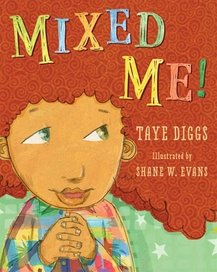 Mixed Me
By: Taye Diggs
Illustrated By: Shane W. Evans

“Mom and Dad say I'm a blend of dark and light:
"We mixed you perfectly, and got you just right."
​
Mike has awesome hair. He has LOTS of energy! His parents love him. And Mike is a PERFECT blend of the two of them.
Still, Mike has to answer LOTS of questions about being mixed. And he does, with LOTS of energy and joy in this charming story about a day in the life of a mixed-race child” – (from Amazon.com)

Taye Diggs wrote this book because, having himself grown up around mixed race people, he’d heard some of the negativity and silly questions people pose, and he didn’t want his mixed race son to have to deal with these things.  He didn’t want his son to have to explain himself, or how he looked.  This is a great book for kids who find themselves in Mike’s shoes, as well as for kids who might be wondering about people who look like Mike.  It’s a great story of self-acceptance and diversity. 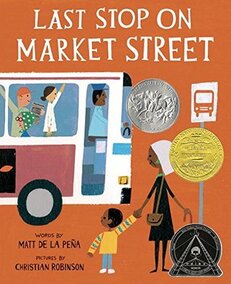 De La Pena is the author of five critically acclaimed young adult novels.  Here he has branched out into the world of picture books, and hit a home run.  This book won the 2016 Newbery Award for best work of fiction for young people, an award usually handed out to a chapter book.  But De La Pena’s story of a young boy and his grandma on their way to help out at what turns out to be a shelter, touched people so much, the picture book was given this honor.

Every Sunday after church, CJ and his grandma ride the bus across town. But today, CJ wonders why they don't own a car like his friend Colby. Why doesn’t he have an iPod like the boys on the bus? How come they always have to get off in the dirty part of town? Each question is met with an encouraging answer from grandma, who helps him see the beauty—and fun—in their routine and the world around them. – from Amazon.com

​The people on the bus to the last stop are a diverse bunch, racially, ability-wise and culturally.  What a great example from our kids that they all get along!  Little CJ even learns from his blind bus-neighbor about how people see things in many different ways, with more than just their eyes.  The illustrations are charming and this book is what it is because of the blend of words with illustrations.  This is a beautiful selection in both story and art.
Make sure to check out these reading lists!
Powered by