These novels in verse not only explore the passion, joy, thrill and satisfaction that comes with playing a game you love but it also explores families, friendships, love, bullying, music, writing and what it means to grow up.  Through the fluidity of Alexander’s verse, it almost feels like a song and both Josh (The Crossover) and Nick (Booked) are characters you won’t soon forget.

The Distance to Home
By: Jenn Bishop

Last summer, Quinnen was the star pitcher of her baseball team, the Panthers. They’re headed for the championship, and her loudest supporter at every game was her best friend and older sister, Haley.

This summer, everything is different. Haley’s death, at the end of last summer, has left Quinnen and her parents reeling. Without Haley in the stands, Quinnen doesn’t want to play baseball. It seems like nothing can fill the Haley-sized hole in her world. The one glimmer of happiness comes from the Bandits, the local minor-league baseball team. For the first time, Quinnen and her family are hosting one of the players for the season. Without Haley, Quinnen’s not sure it will be any fun, but soon she befriends a few players. With their help, can she make peace with the past and return to the pitcher’s mound?
Mike Lupica Novels
Mike Lupica is probably one of the most prominent sports writers out there.  His books are great for every type of sports fan and not only do they focus on the heart of the game but friendship, family, love, and, of course,
​being the best you can be!
​For more books and to learn more about the author, click the cover of his new book,
Last Man Out, ​coming out in September! 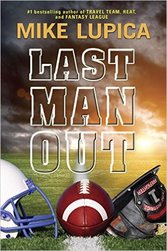 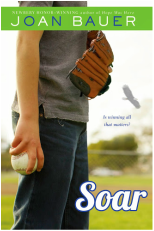 Jeremiah is the world’s biggest baseball fan. He really loves baseball and he knows just about everything there is to know about his favorite sport. So when he’s told he can’t play baseball following an operation on his heart, Jeremiah decides he’ll do the next best thing and become a coach.

Hillcrest, where Jeremiah and his father Walt have just moved, is a town known for its championship baseball team. But Jeremiah finds the town caught up in a scandal and about ready to give up on baseball. It’s up to Jeremiah and his can-do spirit to get the town – and the team – back in the game.  Full of humor, heart, and baseball lore, Soar is Joan Bauer at her best. 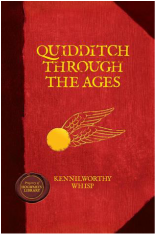 Quidditch Through the Ages
By: J.K. Rowling

The most checked-out book in the Hogwarts Library, and a volume no Quidditch player or Harry Potter fan should be without!

If you have ever asked yourself where the Golden Snitch came from, how the Bludgers came into existence, or why the Wigtown Wanderers have pictures of meat cleavers on their robes, you need QUIDDITCH THROUGH THE AGES. This invaluable volume is consulted by young Quidditch fans on an almost daily basis. 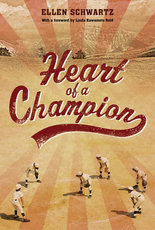 Heart of a Champion
By: Ellen Schwartz

Ten-year-old Kenny (Kenji in Japanese) worships his older brother, Mickey (Mitsuo), a baseball hero whose outstanding performance on the Asahi baseball team has given him fame and popularity. Despite Kenny's suspected heart condition, he is determined to practice secretly with Mickey so he, too, can one day try out for the Asahi. But world events soon overtake life in this quiet community. When Japan attacks Pearl Harbor in 1941, everything for Kenny and his family spirals out of control: schools are closed, businesses are confiscated, fathers are arrested and sent to work camps in the BC interior and mothers and children are relocated to internment camps. When Mickey is arrested for a small act of violence, Kenny manages to keep his family's spirits up, despite the deplorable conditions in camp. Coming across a "vacant" field covered with scrap wood, broken shakes and torn tar paper, Kenny gets permission to clear it and convert it into a baseball field. One by one, the boys in the camp pitch in, and the work gives purpose to their long days. Kenny's persistence, hard work and big dreams shape the teen he is to become in this story of happiness found despite all odds.

Twelve-year-old Ted Gerson has spent most of his summer playing video games. So when his great-uncle dies and bequeaths him the all so-called treasure in his overstuffed junk shop of an apartment, Ted explores it like it’s another level to beat. And to his shock, he finds that eccentric Great-Uncle Ted actually has set the place up like a real-life escape-the-room game!

Using his specially honed skills, Ted sets off to win the greatest game he’s ever played, with help from his friends Caleb and Isabel. Together they discover that Uncle Ted’s “treasure” might be exactly that—real gold and jewels found by a Japanese American unit that served in World War II. With each puzzle Ted and his friends solve, they get closer to unraveling the mystery—but someone dangerous is hot on their heels, and he’s not about to let them get away with the fortune. 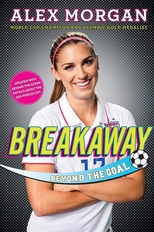 Breakaway: Beyond the Goal
By: Alex Morgan
J BIOGRAPHY

Get inspired to be your best—in sports and in life—with this uplifting memoir from star soccer player and Olympic gold medalist Alex Morgan that includes eight pages of full-color photos!

As a talented and successful female athlete, Alex Morgan is a role model to thousands of girls who want to be their best, not just in soccer, but in other sports and in life. The story of her path to success, from playing in the 2011 Women’s World Cup, to winning gold in the 2012 London Olympics, to ranking as one of the National Team’s top scorers, will inspire everyone who reads it.  From her beginnings with the American Youth Soccer Organization to her key role in the 2015 Women’s World Cup, Alex shares the details that made her who she is today: a fantastic role model and athlete who proudly rocks a pink headband.

​Say It Aint’ So
By: Josh Berk

Lenny, Mike, and Other Mike are back in school for the glory that is seventh grade, and this year, Mike is determined to make catcher on the middle-school team. When Mike's hard work pays off and he wins the coveted postition, Lenny is a little jealous, but he'll settle for being the team's unofficial announcer.

he team has a brilliant new pitcher, Hunter Ashwell, and though he's a bit of a jerk, he and Mike have a great pitcher/catcher dynamic that could make the team champions. But things take a strange turn when Hunter's perfect pitching streak goes downhill, and Lenny suspects foul play—specifically, someone stealing Mike's catcher signals. But who could be responsible, and why?
Don't forget to check out these fantastic summer booklists too!
Powered by