Looking for some great new titles to read this summer that aren't on your school reading list?
Want to add minutes to your summer reading logs, but have no idea where to start?
Then check out these great YA novels available at the library!
They're sure to get your out of your reading slump & into a couple of excellent new series. 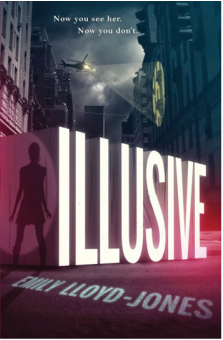 In the not-too-distant future, the world is struck by a deadly plague known as MK.  In order to counter the spread, a vaccine is quickly produced and administered; however, its creators never could have predicted its side-effects.  Of the millions vaccinated, .003 percent of the immunized population develops X-Men type characteristics such as telepathy, levitation and heightened senses.  These superpowered citizens have few options and are either forced into servitude for the U.S. government or claim their freedom through a life of crime.  Seventeen year old Ciere Giba, an illusionist, chose the freedom that comes with being a thief, however, when a burglary goes bad, Ciere’s world and the world of her trusted crew is at risk when she not only becomes involved with a powerful crime syndicate but also discovers a dangerous secret that could change everything.

A cross between X-Men and Ocean’s 11, this dystopian thriller is filled with multiple plot twists that are certain to keep readers on the edge of their seats and eager for the next installment in this new series.  Lloyd-Jones has created not only a fascinating world but also likable characters that readers can identify with as they try to navigate a world in which it isn’t easy to tell the good guys from the bad guys.  A definite read for fans of Veronica Roth’s Divergent trilogy. 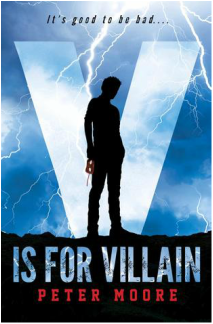 V is for Villain
By: Peter Moore

Who says superheroes have all the fun?  For sixteen-year old Brad Baron, being the non-powered brother of a superhero could lead any good kid to a life of villainy.  Overshadowed by his famous older brother and tormented by his peers at the Monroe Academy for Powered Teens for not measuring up to his superhero legacy, Brad is tired of being the odd man out.  So when Brad meets a group of misfits who are more into political action than weight lifting, he’s thrilled to join a crew that accepts him as he is.  It also doesn’t hurt that he gets to spend more time with the beautiful and enigmatic Layla who may or may not be hiding a totally awesome but totally illegal secret super-power.  With his new friends, Brad is pulled into a web of nefarious criminals, high-stakes battles, and startling family secrets, forcing him to choose which side he's on. And once he does, there's no turning back.

An origin story for the super villain fanatic, it’s hard not to root for Brad as he discovers the gray area between good and evil.  This fast paced novel balances action, humor, and drama – personal, family, and romantic – to create a full picture of a teen that finally finds his place and truly wants to deliver justice, even if the rest of the world thinks it’s for the wrong side.
Looking for more great YA reads?
Check out these Graphic Novels and Non-fiction Titles!
Powered by