I Will Always Write Back by ​Caitlin Alifirenka, Martin Gandra, and Liz Welch
"It started as an assignment. Everyone in Caitlin's class wrote to an unknown student somewhere in a distant place.  Martin was lucky to even receive a pen-pal letter. There were only ten letters, and fifty kids in his class. But he was the top student, so he got the first one.
That letter was the beginning of a correspondence that spanned six years and changed two lives.
In this compelling dual memoir, Caitlin and Martin recount how they became best friends --and better people--through their long-distance exchange. Their story will inspire you to look beyond your own life and wonder about the world at large and your place in it.”-                                Amazon.com
Caitlin and Martin’s friendship makes you wish you were already living in a better world. Their special relationship is cross-continental and makes you wonder how incredibly lucky and random the real world can be! I recommend the audiobook because it feels like the letters are being read to you and you are a part of their friendship. This is a great nonfiction option for fans of realistic friendship fiction.

Walk on Earth a Stranger by Rae Carson
“The first book in a new trilogy from acclaimed New York Times–bestselling author Rae Carson. A young woman with the magical ability to sense the presence of gold must flee her home, taking her on a sweeping and dangerous journey across Gold Rush–era America. Walk on Earth a Stranger begins an epic saga from one of the finest writers of young adult literature.
Lee Westfall has a secret. She can sense the presence of gold in the world around her. Veins deep beneath the earth, pebbles in the river, nuggets dug up from the forest floor. The buzz of gold means warmth and life and home—until everything is ripped away by a man who wants to control her. Left with nothing, Lee disguises herself as a boy and takes to the trail across the country. Gold was discovered in California, and where else could such a magical girl find herself, find safety?
Rae Carson, author of the acclaimed Girl of Fire and Thorns series, dazzles with the first book in the Gold Seer Trilogy, introducing a strong heroine, a perilous road, a fantastical twist, and a slow-burning romance, as only she can.”- Amazon.com
If we’re building a better world, I hope it’s better than the one that Lee is stuck in! The Gold Rush is the exciting setting of this western with a hint of romance. It challenges gender roles, has a super strong female lead and proves that family isn’t always the people that share your blood.

Absolutely True Diary of a Part-Time Indian by Sherman Alexie – “Bestselling author Sherman Alexie tells the story of Junior, a budding cartoonist growing up on the Spokane Indian Reservation. Determined to take his future into his own hands, Junior leaves his troubled school on the rez to attend an all-white farm town high school where the only other Indian is the school mascot.
Heartbreaking, funny, and beautifully written, The Absolutely True Diary of a Part-Time Indian, which is based on the author's own experiences, coupled with poignant drawings by Ellen Forney that reflect the character's art, chronicles the contemporary adolescence of one Native American boy as he attempts to break away from the life he was destined to live.”– Amazon.com
Better worlds are filled with schools where students feel accepted, and when Junior leaves the reservation to attend an all-white school that is the opposite of this situation. This hilarious story is filled with drawings and experiences that will remind you of your own life, despite the unique situation that Junior is in. Pick up this one if you’re looking for a funny, but important story with a flawed family and fascinating life story. 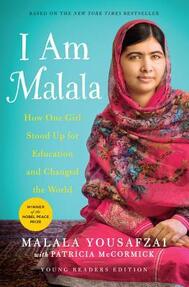 I Am Malala by Malala Yousafzai (the youngest Nobel laureate)
"I come from a country that was created at midnight. When I almost died it was just after midday."
When the Taliban took control of the Swat Valley in Pakistan, one girl spoke out. Malala Yousafzai refused to be silenced and fought for her right to an education.
On Tuesday, October 9, 2012, when she was fifteen, she almost paid the ultimate price. She was shot in the head at point-blank range while riding the bus home from school, and few expected her to survive.”- Barnes and Noble
Malala is the definition of trying to build a better world. Her courage shows through in this memoir that will inspire you to want to change the world. Her family situation is relatable and it encourages you not to forget how privileged we are to have access to education.
Powered by