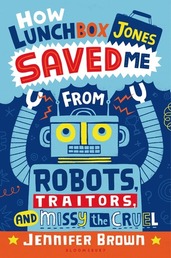 ​How Lunchbox Jones Saved Me From Robots, Traitors and Missy the Cruel
By: Jennifer Brown

Luke Abbott's school is the losing-est school in the history of losing. And that's just fine for him. He'd rather be at home playing video games and avoiding his older brother Rob and the "Greatest Betrayal of All Time."  But now he's being forced to join the robotics team, where surely he'll help uphold the school's losing streak. He'll also meet a colorful cast of characters, including: Mikayla, the girl who does everything with her toes; Jacob and Jacob, who aren't twins but might as well be; the sunflower seed-obsessed Stuart; and Missy the Cruel, Luke's innocent-looking bully since they were six-years-old. But it's an unlikely connection with a mysterious boy known only as "Lunchbox Jones" that will change Luke's life. Turns out, Luke and Lunchbox Jones have a lot more in common than just robots . . . .
This book is filled with nonstop laughs and some of the most epic booger jokes a reader could ask for.  With an excellent mix of humor and heart, this one will definitely have you cheering for the losingest school in history and maybe even learning a thing or two about robotics, friendship, and family. 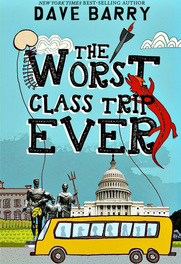 ​​The Worst Class Trip Ever
By: Dave Barry

In this hilarious novel, written in the voice of eighth-grader Wyatt Palmer, Dave Barry takes us on a class trip to Washington, DC. Wyatt, his best friend, Matt, and a few kids from Culver Middle School find themselves in a heap of trouble-not just with their teachers, who have long lost patience with them-but from several mysterious men they first meet on their flight to the nation's capital. In a fast-paced adventure with the monuments as a backdrop, the kids try to stay out of danger and out of the doghouse while trying to save the president from attack-or maybe not.

This book definitely has Dave Barry's trademark humor and goes beyond funny to utterly wacky as readers go on absolutely, the worst field trip, EVER! (or maybe it's the best!).  With the right amount of suspense and laugh out loud scenarios, this book is sure to keep you reading until the very last page.
Continue to tickle your funny bone with these booklists!
Powered by