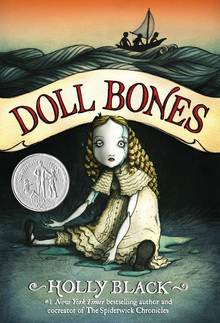 Doll Bones​
by Holly Black
​
Zach, Poppy, and Alice have been friends forever. And for almost as long, they’ve been playing one continuous, ever-changing game of pirates and thieves, mermaids and warriors. Ruling over all is the Great Queen, a bone-china doll cursing those who displease her.

But they are in middle school now. Zach’s father pushes him to give up make-believe, and Zach quits the game. Their friendship might be over, until Poppy declares she’s been having dreams about the Queen—and the ghost of a girl who will not rest until the bone-china doll is buried in her empty grave.

Zach and Alice and Poppy set off on one last adventure to lay the Queen’s ghost to rest. But nothing goes according to plan, and as their adventure turns into an epic journey, creepy things begin to happen. Is the doll just a doll or something more sinister? And if there really is a ghost, will it let them go now that it has them in its clutches? 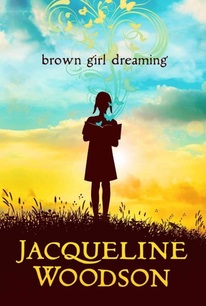 Brown Girl Dreaming
by Jacqueline Woodson
YA BIO
​
Raised in South Carolina and New York, Woodson always felt halfway home in each place. In vivid poems, she shares what it was like to grow up as an African American in the 1960s and 1970s, living with the remnants of Jim Crow and her growing awareness of the Civil Rights movement. Touching and powerful, each poem is both accessible and emotionally charged, each line a glimpse into a child’s soul as she searches for her place in the world. Woodson’s eloquent poetry also reflects the joy of finding her voice through writing stories, despite the fact that she struggled with reading as a child. Her love of stories inspired her and stayed with her, creating the first sparks of the gifted writer she was to become.
Listen to an excerpt read by the author! 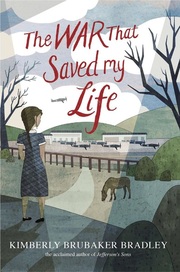 The War That Saved My Life
By: Kimberly Bradley

Nine-year-old Ada has never left her one-room apartment.  Her mother is too humiliated by Ada's twisted foot to let her outside.  So when her little brother Jamie is shipped out of London to escape the war, Ada doesn't waste a minute - she sneaks out to join him.  So begins a new adventure of Ada, and for Susan Smith, the woman who is forced to take the two kids in.  As Ada teachers herself to ride a pony, learns to read, and watches for German spies, she begins to trust Susan - and Susan begins to love Ada and Jamie.  But in the end, will their bond be enough to hold them together through wartime?  Or will Ada and her brother fall back into the cruel hands of their mother? 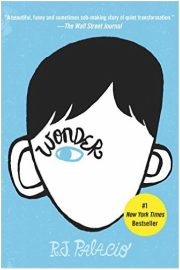 August Pullman wants to be an ordinary ten-year-old. He does ordinary things. He eats ice cream. He plays on his Xbox. He feels ordinary - inside.  But Auggie is far from ordinary. Ordinary kids don't make other ordinary kids run away screaming in playgrounds. Ordinary kids don't get stared at wherever they go.  Born with a terrible facial abnormality, Auggie has been home-schooled by his parents his whole life, in an attempt to protect him from the cruelty of the outside world. Now, for the first time, he's being sent to a real school - and he's dreading it. All he wants is to be accepted - but can he convince his new classmates that he's just like them, underneath it all?

Narrated by Auggie and the people around him whose lives he touches forever, Wonder is a funny, frank, astonishingly moving debut to read in one sitting, pass on to others, and remember long after the final page
Powered by