November is here and what better time to celebrate friends and family, then through books!
Get ready for big adventures, hearty laughs and you may want to grab some tissues, just in case!
Check out the Middle Grade section at the library for these great titles! 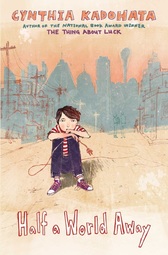 Half a World Away
By: Cynthia Kadohata

Eleven-year-old Jaden is adopted, and he knows he’s an “epic fail.” That’s why his family is traveling to Kazakhstan to adopt a new baby—to replace him, he’s sure. And he gets it. He is incapable of stopping his stealing, hoarding, lighting fires, aggressive running, and obsession with electricity. He knows his parents love him, but he feels...nothing.  When they get to Kazakhstan, it turns out the infant they’ve traveled for has already been adopted, and literally within minutes are faced with having to choose from six other babies. While his parents agonize, Jaden is more interested in the toddlers. One, a little guy named Dimash, spies Jaden and barrels over to him every time he sees him. Jaden finds himself increasingly intrigued by and worried about Dimash. Already three years old and barely able to speak, Dimash will soon age out of the orphanage, and then his life will be as hopeless as Jaden feels now. For the first time in his life, Jaden actually feels something that isn’t pure blinding fury, and there’s no way to control it, or its power.

From camels rooting through garbage like raccoons, to eagles being trained like hunting dogs, to streets that are more pothole than pavement, the vivid depictions in Half a World Awaycreate “an inspiring story that celebrates hope and second chances” (Publishers Weekly, starred review). 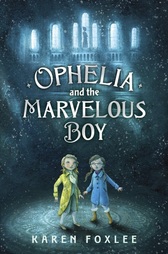 Ophelia and the Marvelous Boy
By: Karen Foxlee

This is the story of unlikely heroine Ophelia Jane Worthington-Whittard who doesn't believe in anything that can't be proven by science. She and her sister Alice are still grieving for their dead mother when their father takes a job in a strange museum in a city where it always snows.
On her very first day in the museum, Ophelia discovers a boy locked away in a long forgotten room.  He is a prisoner of Her Majesty, the Snow Queen.  And he has been waiting for Ophelia's help.  As Ophelia embarks on an incredible journey to rescue the boy everything that she believes will be tested. Along the way she learns more and more about the boy's own remarkable journey to reach her and save the world.  A story within a story, this a modern day fairytale about the power of friendship, courage and love, and never ever giving up. 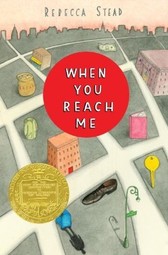 When You Reach Me
By: Rebecca Stead

This remarkable novel holds a fantastic puzzle at its heart.  By sixth grade, Miranda and her best friend, Sal, know how to navigate their New York City neighborhood. They know where it's safe to go, and they know who to avoid. Like the crazy guy on the corner.  But things start to unravel. Sal gets punched by a kid on the street for what seems like no reason, and he shuts Miranda out of his life. The apartment key that Miranda's mom keeps hidden for emergencies is stolen. And then a mysterious note arrives, scrawled on a tiny slip of paper. The notes keep coming, and Miranda slowly realizes that whoever is leaving them knows things no one should know. Each message brings her closer to believing that only she can prevent a tragic death. Until the final note makes her think she's too late.
Looking for more great Middle Grade reads?
Check out these Graphic Novels!
Continue to celebrate friends and family with these booklists!
Powered by