From a friendship forged in the skies of World War II, to sharing your family with the whole world, to the quiet bond between father and daughter -
there are a number of YA titles that celebrate the bonds of family and friendship!
In honor of November, make sure to check out these titles that feature
family and friendships of all shapes and sizes! 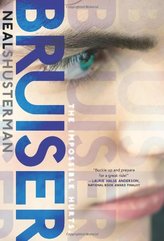 Tennyson Sternberger cannot understand what his gotten into his twin sister, Bronte.  They have always squabbled but her decision to start dating infamous high school bully, outcast, and voted “Most Likely to Get the Death Penalty,” Brewster “Bruiser” Rawlins, has Tennyson’s head spinning and flares a determination to get to the bottom of Brewster’s violent reputation, for his sister’s sake.  Bronte knows all the rumors and the stories circulating about Brewster, but she does not believe them.  Finding him misunderstood and fodder for gossip mongers, Bronte befriends him, knowing that he has a soft side hidden under that tough exterior, one that loves poetry, can memorize Homer’s Odyssey, and is fiercely protective of his little brother.  As each sibling navigates the inner workings of the mysterious “Bruiser,” they each discover that his secret is bigger than either one of them could have imagined or just how dangerous caring or loving anyone can be for him.
​
In true Shusterman fashion, Bruiser, is a novel that is driven by its characters, conflict, lyrical writing, and thought provoking themes.  Never one to shy away from life’s more difficult questions, Shusterman’s handling of thematic elements related to love, family, friendship, and sacrifice is done so in a way that is quietly huge as he examines the different relationships that make up Brewster, Tennyson and Bronte's existence.  Shusterman does not provide easy answers, because in there really are no easy answers to what he is asking his readers to contemplate..  Rather he allows readers to ponder their own responses to the effect that Brewster has on the lives he has touched as well as how those lives touch back.  This also fuels the conflict as each struggles internally with the repercussions of knowing Brewster’s gift and trying to figure out whether they are trying to help him or unwittingly manipulating him through misguided good intentions. 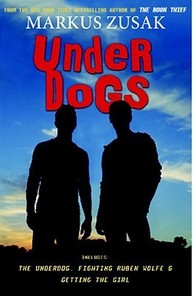 Before The Book Thief, Markus Zusak wrote a trilogy of novels about the Wolfe Brothers: THE UNDERDOG, FIGHTING RUBEN WOLFE, and GETTING THE GIRL. Cameron and Ruben Wolfe are champions at getting into fights, coming up with half-baked schemes, and generally disappointing girls, their parents, and their much more motivated older siblings. They're intensely loyal to each other, brothers at their best and at their very worst. But when Cameron falls head over heels for Ruben's girlfriend, the strength of their bond is tested to its breaking point.

This is an excellent trilogy that really captivates the relationship between brothers.  The Wolfe brothers are loyal to a fault and as their bond is continuously tested, they discover just how strong their relationship is.  Told in Zusak's signature stunning prose, the Wolfe brothers are not only well developed characters but the introduction of the family framework allows readers to truly understand the sibling dynamic.  Whether or not you're a fan of Zusak, this compilation is one that every ready can enjoy. 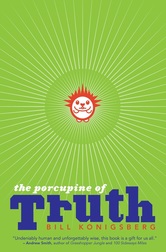 The Porcupine of Truth
By: Bill Konigsberg

Carson Smith is resigned to spending his summer in Billings, Montana, helping his mom take care of his father, a dying alcoholic he doesn't really know. Then he meets Aisha Stinson, a beautiful girl who has run away from her difficult family, and Pastor John Logan, who's long held a secret regarding Carson's grandfather, who disappeared without warning or explanation thirty years before. Together, Carson and Aisha embark on an epic road trip to find the answers that might save Carson's dad, restore his fragmented family, and discover the "Porcupine of Truth" in all of their lives.

This isn't just an epic road trip novel.  It's about finding friendships when we least expect them.  It's about coming to terms with the family we have and learning to put together the fractured pieces.  It's about discovering family secrets in order to understand our families better.  It's about all of these things and more.  With expert character development and sensitive humor, Konigsberg has created a masterpiece that celebrates all manner of friendship and family in a way that is both sweet and honest.  A definite must read this holiday season.
Looking for more great YA reads?
Check out these Graphic Novels & Non-Fiction Titles!
﻿Continue to celebrate friends and family with these booklists!
Powered by