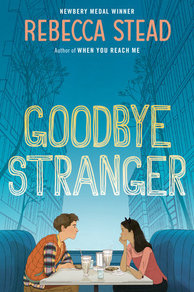 This brilliant novel by Newbery Medal winner Rebecca Stead explores multiple perspectives on the bonds and limits of friendship.  Bridge is an accident survivor who’s wondering why she’s still alive. Emily has new curves and an almost-boyfriend who wants a certain kind of picture. Tabitha sees through everybody’s games—or so she tells the world. The three girls are best friends with one rule: No fighting. Can it get them through seventh grade?  This year everything is different for Sherm Russo as he gets to know Bridge Barsamian. What does it mean to fall for a girl—as a friend?  On Valentine’s Day, an unnamed high school girl struggles with a betrayal. How long can she hide in plain sight?  Each memorable character navigates the challenges of love and change in this captivating novel. 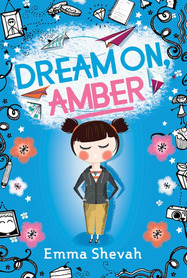 Dream On, Amber
By: Emma Shevah

My name is Amber Alessandra Leola Kimiko Miyamoto.
I have no idea why my parents gave me all those hideous names but they must have wanted to ruin my life, and you know what? They did an amazing job.

As a half-Japanese, half-Italian girl with a ridiculous name, Amber's not feeling molto bene (very good) about making friends at her new school.  But the hardest thing about being Amber is that a part of her is missing. Her dad. He left when she was little and he isn't coming back. Not for her first day of middle school and not for her little sister's birthday. So Amber will have to dream up a way for the Miyamoto sisters to make it on their own... 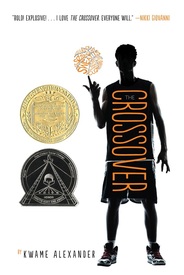 The Crossover
By: Kwame Alexander

"With a bolt of lightning on my kicks . . .The court is SIZZLING. My sweat is DRIZZLING. Stop all that quivering. Cuz tonight I’m delivering," announces dread-locked, 12-year old Josh Bell. He and his twin brother Jordan are awesome on the court. But Josh has more than basketball in his blood, he's got mad beats, too, that tell his family's story in verse, in this fast and furious middle grade novel of family and brotherhood from Kwame Alexander (He Said, She Said 2013).  Josh and Jordan must come to grips with growing up on and off the court to realize breaking the rules comes at a terrible price, as their story's heart-stopping climax proves a game-changer for the entire family. 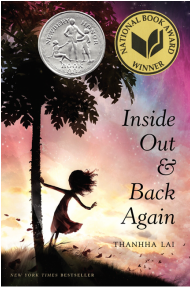 Inside Out & Back Again
By: Thanhha Lai

Inside Out and Back Again is a New York Times bestseller, a Newbery Honor Book, and a winner of the National Book Award! Inspired by the author's childhood experience of fleeing Vietnam after the Fall of Saigon and immigrating to Alabama, this coming-of-age debut novel told in verse has been celebrated for its touching child's-eye view of family and immigration.  Hà has only ever known Saigon: the thrills of its markets, the joy of its traditions, and the warmth of her friends close by. But now the Vietnam War has reached her home. Hà and her family are forced to flee as Saigon falls, and they board a ship headed toward hope—toward America.

Celebrate the love of family and country in this beautiful novel told in verse.
Continue to share the love with these booklists!
Powered by