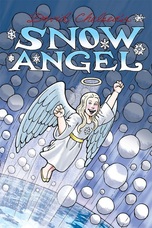 When a young girl lays on the snow covered ground and kicks her arms and legs into the motion of a snow angel she transforms into flying, vigliante snow angel. This “crime fighting cherub” takes on jaywalkers, shoplifters, and bicycle thieves. When she is told she will be moving to Tucson, where there is no snow the snow angel is able to flip the earth’s axis to change climate patterns to include snow in Tucson.

This graphic novel features the original Snow Angel short story along with six other stories that detail the adventures of the snow angel. The illustrations are bold and colorful. Some sections do not include text, allowing the reader to decipher the story through the pictures. Additionally, the text is made up of mostly dialogue that relies on the illustrations to describe the characters and setting. 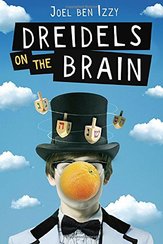 Dreidels on the Brain
By Joel Ben Izzy

It’s Chanukah of 1971 and Joel is betting all of his beliefs on this single holiday. Joel, a twelve year old magician, lives in a struggling household. While he secretly hopes for the silk top hat he wants for his magic act, Joel knows that while most Jewish children receive gifts over the eight nights of Chanukah his parents will offer up the The Explanation - the story of how they wanted to buy gifts, but instead had to spend money on bills. For Joel The Explanation makes the lack of presents even worse as it makes him feel guilty for wanting anything at all. The Winter Holiday Assembly is approaching at school and Joel and his family, the only Jews in town, have been asked to light the Menorah. Joel is worried he will be humiliated and hopes for miracle. Will Joel have his faith restored this Chanukah?

Dreidels on the Brain is made up of Joel Ben Izzy’s childhood events. This somber, first person story provides a glimpse into the life of an adolescent Jewish boy struggling to find where he belongs, while providing the reader knowledge on Chanukah and Judaism. 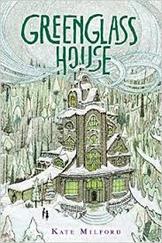 Milo’s parent’s operate an inn called the Greenglass House. The house, named for it’s green glass windows sits on top of a hill overlooking a river. The location is prime for smugglers who are welcome at the Greenglass House. Milo has just begin his holiday break from school and is looking forward to spending their slow season relaxing. That is, until the bell rings alerting the family to a guest. When that guest has settled the bell rings again. Instead of being upset that Milo has to work over his break, his curiosity peaks and he is soon looking for clues to figure out how the guests are connected to the old inn and why they’ve have come.
Continue to Celebrate the Holidays with these Festive Lists!
Powered by