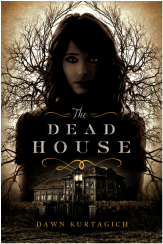 The Dead House
​By: Dawn Kurtagich

Welcome to the Dead House. Three students: dead. Carly Johnson: vanished without a trace.
Two decades have passed since an inferno swept through Elmbridge High, claiming the lives of three teenagers and causing one student, Carly Johnson, to disappear. The main suspect: Kaitlyn, "the girl of nowhere." Kaitlyn's diary, discovered in the ruins of Elmbridge High, reveals the thoughts of a disturbed mind. Its charred pages tell a sinister version of events that took place that tragic night, and the girl of nowhere is caught in the center of it all. But many claim Kaitlyn doesn't exist, and in a way, she doesn't - because she is the alter ego of Carly Johnson. Carly gets the day. Kaitlyn has the night. It's during the night that a mystery surrounding the Dead House unravels and a dark, twisted magic ruins the lives of each student that dares touch it. 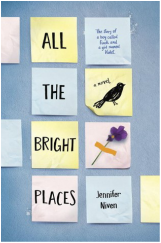 All the Bright Places
​By: Jennifer Niven

When Finch and Violet meet on the ledge of the bell tower at school, it’s unclear who saves whom. And when they pair up on a project to discover the “natural wonders” of their state, both Finch and Violet make more important discoveries: It’s only with Violet that Finch can be himself—a weird, funny, live-out-loud guy who’s not such a freak after all. And it’s only with Finch that Violet can forget to count away the days and start living them. But as Violet’s world grows, Finch’s begins to shrink. 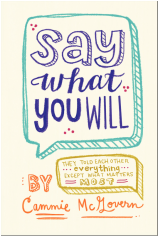 Say What You Will
By: Cammie McGovern

Born with cerebral palsy, Amy can't walk without a walker, talk without a voice box, or even fully control her facial expressions. Plagued by obsessive-compulsive disorder, Matthew is consumed with repeated thoughts, neurotic rituals, and crippling fear. Both in desperate need of someone to help them reach out to the world, Amy and Matthew are more alike than either ever realized. When Amy decides to hire student aides to help her in her senior year at Coral Hills High School, these two teens are thrust into each other's lives. As they begin to spend time with each other, what started as a blossoming friendship eventually grows into something neither expected.
Erin H.'s Top Picks!​ 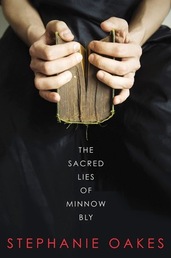 The Sacred Lies of Minnow Bly
​By: Stephanie Oakes

The Kevinian cult has taken everything from seventeen-year-old Minnow: twelve years of her life, her family, her ability to trust.  And when she rebelled, they took away her hands, too. Now their Prophet has been murdered and their camp set aflame, and it's clear that Minnow knows something—but she's not talking. As she languishes in juvenile detention, she struggles to un-learn everything she has been taught to believe, adjusting to a life behind bars and recounting the events that led up to her incarceration. But when an FBI detective approaches her about making a deal, Minnow sees she can have the freedom she always dreamed of—if she’s willing to part with the terrible secrets of her past.

To set the record straight - yes, they literally take away her hands and it is gruesome.  But I want to emphasize that that is such a small part of what is truly a harrowing story about hope, the dangers of blind faith and one of the greatest powers of all, finding faith in yourself.  Minnow is a character that isn't easily forgotten and I think that's one of the most impressive things about this story - the fact that this book came out in June of 2015, and I still can't get her out my head.  Her journey is one that is filled with pain, hardship, and sadness, but her ability to find hope under such bleak circumstances makes her a force to be reckoned with. 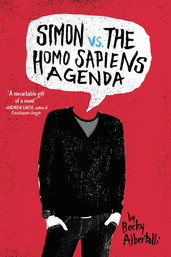 Simon vs. The Homo Sapiens Agenda
​By: Becky Albertalli

Sixteen-year-old and not-so-openly gay Simon Spier prefers to save his drama for the school musical. But when an email falls into the wrong hands, his secret is at risk of being thrust into the spotlight. Now Simon is actually being blackmailed: if he doesn’t play wingman for class clown Martin, his sexual identity will become everyone’s business. Worse, the privacy of Blue, the pen name of the boy he’s been emailing, will be compromised.  With some messy dynamics emerging in his once tight-knit group of friends, and his email correspondence with Blue growing more flirtatious every day, Simon’s junior year has suddenly gotten all kinds of complicated. Now, change-averse Simon has to find a way to step out of his comfort zone before he’s pushed out.

Everyone needs an adorable story in their life and I think I've finally found mine.  Seriously, this book is filled with so many utterly adorable moments that I would constantly go back and re-read passages/dialogue over and over again because they were just that wonderful.  Don't get me wrong, this book isn't fluff.  Albertalli handles some hard-hitting issues, but she does so with grace and balance allowing the funny moments to be hilarious, the serious moments to be thought-provoking, and the adorable moments to be, well, adorable!  Additionally, Albertalli has a knack for characters, and these ones are certain to stay with you forever. 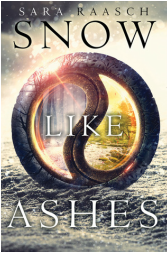 Sixteen years ago the Kingdom of Winter was conquered and its citizens enslaved, leaving them without magic or a monarch. Now, the Winterians’ only hope for freedom is the eight survivors who managed to escape, and who have been waiting for the opportunity to steal back Winter’s magic and rebuild the kingdom ever since.

2015 was a great year for fantasy.  Readers received new works and next installments from heavy hitters like Morgan Rhodes and Sarah J. Maas, but it was also a great year for newcomers, enter Sara Raasch's Snow Like Ashes.

Is there anything particularly new in terms of tropes and ideas?  Not really, but in this instance that's actually okay!  A lot of it has to do with Raach's extraordinary character development.  Meira is a fantastic heroine, however, she doesn't carry the story alone.  The complicated relationships and dynamics between every character not only make them necessary, but also help make this story compulsively readable.

In addition to spectacular character development, the world-building is totally awesome!  Raasch has created eight kingdoms, each with their own customs, ideals and magic and each having their own horrifying histories.  The way the author is able to seamlessly draw these kingdoms is not only interesting but allows readers to feel immersed in this world. Everything that a fantasy reader is looking for! 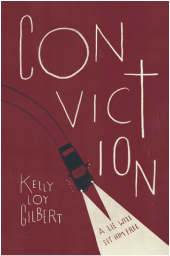 Ten years ago, God gave Braden a sign, a promise that his family wouldn’t fall apart the way he feared.  But Braden got it wrong: his older brother, Trey, has been estranged from the family for almost as long, and his father, the only parent Braden has ever known, has been accused of murder. The arrest of Braden’s father, a well-known Christian radio host, has sparked national media attention. His fate lies in his son’s hands; Braden is the key witness in the upcoming trial.

While the pacing of this book may require a bit of effort, it is completely worth it if you're willing to give this story the time it deserves.  This is an incredibly multi-layered novel, one that not only examines the complexities of the relationships between father and sons, but also the relationships between brothers.  Through exceptional writing, Gilbert is able to express just how conflicted Braden is and how a child's mind may see things differently and how much we want the approval of our parents.  The author also tackles some heavy issues such as the messiness of love, faith, and humanity, with sensitivity and without anything ever feeling inaccessible.  The baseball vignettes are a nice addition and make this an excellent read for all teen readers, but especially for boys, as they may be able to relate to Braden and this extraordinary examination of fathers, sons, and brothers. 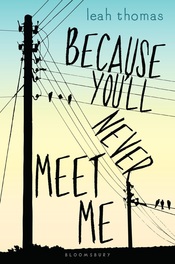 Because You'll Never Meet Me
By: Leah Thomas

Ollie and Moritz are best friends, but they can never meet. Ollie is allergic to electricity. Contact with it causes debilitating seizures. Moritz’s weak heart is kept pumping by an electronic pacemaker. If they ever did meet, Ollie would seize. But Moritz would die without his pacemaker. Both hermits from society, the boys develop a fierce bond through letters that become a lifeline during dark times—as Ollie loses his only friend, Liz, to the normalcy of high school and Moritz deals with a bully set on destroying him.

This is one of my top picks for 2015 because I loved how unusual the story was.  I can honestly say I've never read a book about best friends that can never meet not, because of distance but because of the health risks they would bring to one another's lives.  I wanted to see how the author would play this out and while I was a tad disappointed in the ending, I think that the overall scope of this book is utterly unique and brings to a light a lot of issues that teens, and humans, of all ages can easily relate to. 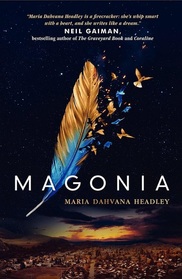 Since she was a baby, Aza has suffered from a mysterious lung disease that makes it ever harder for her to breathe, to speak—to live.  So when Aza catches a glimpse of a ship in the sky, her family chalks it up to a cruel side effect of her medication. But Aza doesn't think this is a hallucination. She can hear someone on the ship calling her name.  Only her best friend, Jason, listens. Jason, who’s always been there. Jason, for whom she might have more-than-friendly feelings. But before Aza can consider that thrilling idea, something goes terribly wrong. Aza is lost to our world—and found, by another. Magonia.

Above the clouds, in a land of trading ships, Aza is not the weak and dying thing she was. In Magonia, she can breathe for the first time. Better, she has immense power—and as she navigates her new life, she discovers that war is coming. Magonia and Earth are on the cusp of a reckoning. And in Aza’s hands lies the fate of the whole of humanity—including the boy who loves her. Where do her loyalties lie?

Ohhhh boy!  Are you in for a ride with Magonia!  This is truly a book that's the first of its kind.  It's not the next Hunger Games or Twilight or Fault in our Stars it is a story all its own and I think that's why it was one of my favorite books of 2015.  To say I was impressed would be an understatement.  In addition to this, the author is somehow able to seamlessly weave multiple genres without it ever feeling overwhelming.  There's fantasy, sci-fi, romance, family drama, and even historical facts all placed into the narrative making this a book that is accessible to every type of reader.  Additionally, I promise you, Neil Gaiman wasn't lying when he said that "she [Headley] writes like a dream." There is a lot of whimsy and magic in Headley's writing style and it reads like a fairy tale, a style that certainly accentuates its genre-defying roots.  Seriously, why are you still reading this review?  You should be grabbing this book from the library right now!
More spectacular 2015 YA titles! (because sometimes it is nearly impossible to just pick 5!)
Powered by