​​Goldfish: A Novel
By: Nat Luurtsema

Lou Brown is one of the fastest swimmers in the county. So things are looking pretty rosy the day of the Olympic time-trials. With her best mate Hannah by her side, Lou lines up by the edge of the pool, snaps her goggles on and bends into her dive…

Everything rests on this race. It’s Lou’s thing.

… or it was. She comes dead last and to top it all off Hannah sails through leaving a totally broken Lou behind.  Starting again is never easy, particularly when you’re the odd-one out in a family of insanely beautiful people and a school full of social groups way too intimidating to join. Where do you go from here? Finding a new thing turns out to be the biggest challenge Lou’s ever faced and opens up a whole new world of underwater somersaults, crazy talent shows, mean girls and a great big load of awkward boy chat.

Runningback Mick Johnson has dreams: dreams of cutting back, finding the hole, breaking into the open, and running free with nothing but green grass ahead. He has dreams of winning and of being the best. But football is a cruel sport. It requires power, grace, speed, quickness, and knowledge of the game. It takes luck, too. One crazy bounce can turn a likely victory into sudden defeat. What elite athlete wouldn’t look for an edge? A way to make him bigger, stronger, faster?
This novel explores the dark corners of the heart of a young football player as he struggles for success under the always glaring—and often unforgiving—stadium lights.

Jessica thinks her life is over when she loses a leg in a car accident. She’s not comforted by the news that she’ll be able to walk with the help of a prosthetic leg. Who cares about walking when you live to run?

As she struggles to cope, Jessica feels that she’s both in the spotlight and invisible. People who don’t know what to say act like she’s not there. Jessica’s embarrassed to realize that she’s done the same to a girl with CP named Rosa. A girl who is going to tutor her through all the math she’s missed. A girl who sees right into the heart of her.

With the support of family, friends, a coach, and her track teammates, Jessica may actually be able to run again. But that’s not enough for her now. She doesn’t just want to cross finish lines herself—she wants to take Rosa with her.
Explore the world of mountain climbing in Roland Smith's PEAK duology.  In Peak, readers meet Peak Marcello, who at 14 years old is arrested for scaling a New York City skyscraper.  His punishment: Either wither away in Juvie or go live with his long-lost father who runs a climbing company in Thailand.  The choice is clear to Peak, however, his father's sudden interest may have some strings attached.  As owner of Peak Expeditions, he wants his son to be the youngest person to reach the Everest summit--a climb that is beyond dangerous. Even so, for a climbing addict like Peak, tackling Everest is the challenge of a lifetime. But it's also one that could cost him his life.

In The Edge, Peak is back!  The International Peace Ascent is the brainchild of billionaire Sebastian Plank: Recruit a global team of young climbers and film an inspiring, world-uniting documentary. The adventure begins when fifteen-year-old Peak Marcello and his mountaineer mother are helicoptered to a remote base camp in the Hindu Kush Mountains on the Afghanistan-Pakistan border. When the camp is attacked and his mother taken, Peak has no choice but to track down the perpetrators to try to save her.

In his duology, Smith has created an action-packed adventure that is filled with suspense.

Grace lives and breathes gymnastics—but no matter how hard she pushes herself, she can never be perfect enough.
Leigh, Grace’s best friend, has it all: a gymnastics career, a normal high-school life... and a secret that could ruin everything.
Camille wants to please her mom, wants to please her boyfriend, and most of all, wants to walk away.
Wilhelmina was denied her Olympic dream four years ago, and she won’t let anything stop her again. No matter what.
Monica is terrified. Nobody believes in her—and why should they?

By the end of the two days of the U.S. Olympic Gymnastics Trials, some of these girls will be stars. Some will be going home with nothing. And all will have their lives changed forever.

A fascinating look into the world and politics of the gymnastics world while simultaneously exploring issues that every single teen can relate to.  This girls may be on the road to Olympic gold, but they're also still girls making them not utterly real but relatable as well.

Basketball has always been an escape for Finley. He lives in gray, broken Bellmont, a town ruled by the Irish Mob, drugs, violence, and racially charged rivalries. At home, he takes care of his disabled grandfather, and at school he’s called “White Rabbit”, the only white kid on the varsity basketball team. He’s always dreamed of getting out somehow with his girlfriend, Erin. But until then, when he puts on his number 21, everything seems to make sense.

Russ has just moved to the neighborhood. A former teen basketball phenom from a privileged home, his life has been turned upside down by tragedy. Cut off from everyone he knows, he now answers only to the name Boy21—his former jersey number—and has an unusual obsession with outer space.  As their final year of high school brings these two boys together, “Boy21” may turn out to be the answer they both need.

Losers Take All
By: David Klass

At Jack Logan’s sports-crazy New Jersey high school, the new rule is that all kids must play on a team. So Jack and a ragtag group of anti-athletic friends decide to get even. They are going to start a rebel JV soccer team whose mission is to avoid victory at any cost, setting out to secretly undermine the jock culture of the school. But as the team’s losing formula becomes increasingly successful at attracting fans and attention, Jack and his teammates are winning in ways they never expected—and don’t know how to handle

A dramatic (and comedic) book that allows you to see that winning isn't everything and sometimes defeat can be pretty sweet. 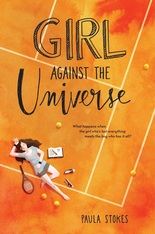 Girl Against the Universe
By: Paula Stokes

Maguire is bad luck. No matter how many charms she buys off the internet or good luck rituals she performs each morning, horrible things happen when Maguire is around. Like that time the rollercoaster jumped off its tracks. Or the time the house next door caught on fire. Or that time her brother, father, and uncle were all killed in a car crash—and Maguire walked away with barely a scratch.

It’s safest for Maguire to hide out in her room, where she can cause less damage and avoid meeting new people who she could hurt. But then she meets Jordy, an aspiring tennis star. Jordy is confident, talented, and lucky, and he’s convinced he can help Maguire break her unlucky streak. Maguire knows that the best thing she can do for Jordy is to stay away. But it turns out staying away is harder than she thought. 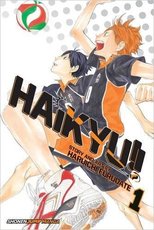 Haikyu!!
[Haikyu!! Volume 1]
By: Haruichi Furudate
YA MANGA
​
A chance event triggered Shouyou Hinata's love for volleyball. His club had no members, but somehow persevered and finally made it into its very first and final regular match of middle school, where it was steamrolled by Tobio Kageyama, a superstar player known as "King of the Court."  Vowing revenge, Hinata applied to the Karasuno High School volleyball club... only to come face-to-face with his hated rival, Kageyama 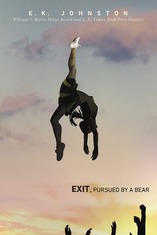 ​Exit, Pursued By a Bear
By: E.K. Johnston

Hermione Winters is captain of her cheerleading team, and in Palermo Heights, this doesn’t mean what you think it means. At PHHS, the cheerleaders don't cheer for the sports teams; they are the sports team—the pride and joy of a tiny town. The team's summer training camp is Hermione's last and marks the beginning of the end of…she’s not sure what. She does know this season could make her a legend. But during a camp party, someone slips something in her drink. And it all goes black.

In every class, there's a star cheerleader and a pariah pregnant girl. They're never supposed to be the same person. Hermione struggles to regain the control she's always had and faces a wrenching decision about how to move on. The assault wasn't the beginning of Hermione Winter's story and she's not going to let it be the end. She won’t be anyone’s cautionary tale.

Such an excellent book that not only examines the world of competitive cheerleading, but also demonstrates that a traumatic event doesn't have to equate to a downward spiral.  That friends, family members, and peers don't always turn into your biggest enemies, but rather your greatest allies.  That you should never feel afraid to report a crime, to talk about it, to be angry about it.  That you are made of much stronger stuff then you ever could have imagined.  I love Hermione for all of these things, and I think other readers will too.
NON-FICTION
Don't forget to check out these fantastic summer booklists too!
Powered by